Costa Rica is world-renowned for its biodiversity, and eco-tourism is a large contributor to the national economy and local livelihoods. Many visitors may catch only a glimpse of Costa Rica’s cities through a car window while being whisked between the airport and forests, mountains or beaches. But this is in contrast with the everyday experience of average Costa Ricans, more than 80% of whom live in urban areas. Nature and biodiversity are increasingly becoming an important part of the country’s urban areas, too, benefiting both residents and visitors.

In partnership with UrbanShift, national and local governments in metropolitan San José are working toward greening and decarbonizing their economy. The metropolitan area, which represents over 2 million people, plans to enable policy reforms to reduce urban biodiversity loss, restore green areas and improve river water quality. For these plans to be successful, it is critical to incorporate biodiversity into urban design mechanisms and transform decision-making processes toward valuing and investing in the benefits that nature provides to cities.

As a demonstrated leader in climate action and renewable energy, Costa Rica has an opportunity to serve as a model in the arena of urban planning as well. UrbanShift’s support to Costa Rica on sustainable and integrated urbanization includes research and engagement to help answer the question: how can biodiversity in urban areas complement new transit infrastructure and land redevelopment?

The Importance of Biodiversity to Cities

Urban biodiversity is an important component of global biodiversity, and as such contributes to the health of the entire planet. It also delivers numerous gains to cities: natural areas and nature-based infrastructure can enhance flood and heat mitigation, prevent erosion, and improve food security, water quality and groundwater recharge. In addition, healthy ecosystems can result in enriching and vibrant urban communities that provide greater opportunities for recreation, more equitable access to amenities and a shared public identity for residents, uplifting the physical and mental well-being of all.

Biodiversity is one of three indicator areas selected by UrbanShift to align with the priorities of the Global Environment Facility. Guided in part by the indicators identified in the Singapore Index on City Biodiversity, UrbanShift’s geospatial data team at WRI recently completed a baseline assessment related to biodiversity in the San José region. Similar assessments for other urban areas participating in UrbanShift will soon be available.

What can we learn about biodiversity in the San José metropolitan region from global datasets? The factors that influence habitat quality are not only critical for wildlife, but also shape the livability of a city. Is it a place where people want to create a home, earn a living, raise a family, invest in or spend their free time?

Below, we look at three themes related to biodiversity that impact the viability of nature and the human experience in a city. We also review how the San José region performs on these indicators. Our methods and data sources, as well as the indicators for additional biodiversity topics, are described in detail in the baseline indicator assessment of the region.

The municipalities of the San José region are home to more than 60 at-risk plant species and nearly 80 at-risk bird species. Biodiversity is contingent on the health of critical native species, which in turn depends on the preservation, restoration and connectivity of habitats.

Habitat can be fragmented by roads and other infrastructure that is hostile to animal movement. The converse of fragmentation, habitat connectivity, describes how easily wildlife can move between isolated patches of hospitable land. The Singapore Index measures connectivity using an indicator called coherence: a network of patches can have high coherence if they are close enough together that animals can move safely from patch to patch. Based on coherence, the San José region’s most urban municipalities have much lower habitat connectivity compared to outlying areas.

As Costa Rican cities plan for urban regeneration, it will be important to expand the area and improve the connectivity of natural spaces, following in the footsteps of the national government’s highly successful reforestation efforts. Our analysis shows that some San José municipalities have made progress on habitat restoration, with at least 1% of land in six municipalities restored or passively converted to natural classes since 2000, but most of them have lost more habitat in that time than they have gained.

Map 1: Habitat Change and Connectivity in the San José Region

The green infrastructure that supports biodiversity – soils, trees, green corridors and waterways – can also increase a city’s resilience to climate shocks. Trees provide cooling impacts, and permeable, “spongy” surfaces, like vegetated soils or porous pavers, allow water to soak in rather than run off, improving flood management and groundwater supply.

From our baseline assessment, the relationship between tree cover and land surface temperature in the San José region is strong: from February through March, the hottest time of year, areas shaded by trees are up to 10 degrees Celsius (18 degrees Fahrenheit) cooler than those without trees. At the same time, areas of the city with a greater percentage of impermeable surfaces – pavement, buildings and other hard infrastructure which usually retains heat and prevents water infiltration – are at greater risk of the heat island effect and flooding from extreme rain events.

Humans are naturally biophilic, meaning they are drawn to nature. Even fleeting exposure to vegetation in the environment has been shown to improve physical and mental well-being. Easy access to outdoor spaces for recreation is also essential to build and maintain social connections.

The San José region contains both large recreational areas, like nature reserves located at the peripheries, and many smaller green areas, like urban parks and riparian corridors located in more densely populated zones. Our analysis shows that even though walkable access to these natural areas is available for 70% or more of residents, the overall amount of green space is less than 0.1 hectare per 1,000 people. This is significantly lower that the scoring of the Singapore Index, which is based on a widely observed recommendation of at least 0.9 hectare of recreational space per 1,000 people.

Strengthening Biodiversity for People and Nature

Our baseline assessment of the San José metropolitan region shows it is endowed with rich and unique biodiversity. However, as measured by the indicators of the Singapore Index, there are many opportunities to further support urban biodiversity and better utilize the services that nature can provide to the city.

Strategies that address this gap include increasing the rate of habitat and tree cover restoration while paying particular attention to linking habitats with one another. Decreasing impervious surfaces in the most urban municipalities, specifically for areas that suffer from extreme heat or flooding, can also diminish the urban heat island effect and mitigate the risk of destructive storms. And, although overall access to recreational areas is relatively high, expanding the amount of space afforded to these areas can reduce the negative impact of activities on existing facilities and natural ecosystems while providing higher health benefits.

Using biodiversity as an anchor for a new model of urban regeneration holds enormous potential for San José. It can strengthen natural ecosystems, improve people’s quality of life and enhance the ability of existing infrastructure to weather extreme events. Costa Rica is moving in the right direction by recognizing the opportunities presented by urban biodiversity and taking steps to realize this potential through its participation in UrbanShift, including technical assistance and targeted local interventions.

How Costa Rica’s capital is reimagining our urban future

We sat down with the Mayor of San José, Johnny Araya Monge, to discuss some of the city’s present challenges and how integrated planning is being put to work to make San José a greener and more inclusive place to live. 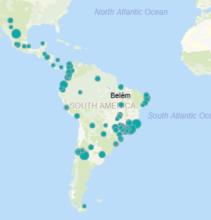