Cities are at the forefront of the challenges brought on by climate change, facing hotter temperatures, more frequent natural disasters and a widening socioeconomic gap. This is especially true of cities in India – one of UrbanShift’s nine countries of practice – which harbors more than 17% of the world’s population and ranks as the seventh most vulnerable country to climate change.

Yet, these same cities have the potential to play a leading role in building a future centered around both people and planet.

Surat, an UrbanShift-supported city in India, is at the vanguard of this global movement towards greener, more inclusive urban development. Located on the banks of the Tapi River in the western state of Gujrat, Surat is home to 7 million people and the historic center of India’s textile and diamond industry.  It is also projected to be the world’s fastest-growing city between 2019 - 2035. Nature-positive, climate-resilient infrastructure is essential if Surat is to accommodate the predicted surge in population and concurrent physical expansion without negatively impacting the environment or the quality of life of its residents.

Surat’s leaders are more than up for the task. The city has been recognized for introducing bold policies to become a smart, green metropolis, receiving the 2020 UNESCO Netexplo Smart Cities Award in the resilience category for its bottom-up approach to creating affordable housing projects, strengthening environmental regulations in construction, and instituting data-driven water management solutions.

We sat down with the Municipal Commissioner of Surat, Shri Banchhanidhi Pani, to discuss some of the city’s present challenges, successes and goals in the path towards a sustainable urban future.

(This conversation has been lightly edited for clarity)

Could you tell us a little bit about Surat? How would you encapsulate the character, spirit and culture of the city and its people?

Surat has always been an enterprising city, given its history as a port and industrial hub. Surtees are known for their helping nature and resilience; they have an ability to bounce back from the worst of disasters and rebuild their city even better than before.

Surat is also famed for its culture of innovation. It is the second cleanest city in India and generates 34% of its energy from renewable sources. In addition, Surat has won the “Best Performance” award from the Indian Ministry of Housing and Urban Affairs (MoHUA) Smart Cities Mission for three consecutive years, as well as multiple project awards for advances in water and waste management and urban mobility. It is truly a future-forward city.

What does sustainability mean to you? Why is it important for a city like Surat to be sustainable?

Dense, rapidly growing cities like Surat have a high demand for land and other natural resources. At the same time, we depend on our natural resources – our rivers, our lakes and trees – for not just economic but psychological benefits. Human beings are a part of nature. When water and trees are adversely affected, so are we.

Creating a balance between nature and development is key. By protecting nature, we prevent pollution from contaminating our land, air and water, and we protect the health of our citizens.

For this reason, I consider sustainability as the top priority for Surat, and for the world. It is a global common good.

What are Surat’s sustainability goals? Could you indicate a few of these goals and the progress you have made in achieving them?

One of Surat’s main sustainability goals is the management of solid and liquid waste. Surat also aims to increase green cover from an existing 18% to more than 25% throughout the city. We plan to expand the public transportation system in order to reduce congestion and air pollution caused by vehicular traffic, and we are also working with the construction sector to implement green building codes and standards.

To achieve these goals, Surat has adopted various strategies, such as aiming to eliminate single-use plastics, initiating circular economy models in the waste sector, further developing and electrifying the city bus system, as well as increasing the number of biodiversity parks.

Though some of the projects have a long-term focus, Surat’s sustainability journey has already begun.

What can other cities in India and around the world learn from Surat’s example?

Surat has put into place several sustainable practices that other cities could adopt. First, 34% of our energy derives from renewable sources. Second, Surat is the only city in India that treats all its sewage water and generates revenue while doing so, which subsidizes the operational and maintenance costs of the sewage treatment. Third, Surat has created several biodiversity parks using native flora that improve air quality, restore polluted ecosystems and create green spaces that residents can enjoy.

Surat is also a city where technology is used to its fullest. We are utilizing transportation data and a common city payment system to optimize public transit. Smart water meters and streetlights have been implemented to more efficiently manage our resources. The city also meticulously monitors water and air quality indicators to identify areas where intervention is needed and track current trends and progress.

Digital technology has played a large role in Surat’s success and is a way by which we can become a model sustainable city, demonstrating how nature and development can work together and co-exist in harmony.

In addition to the smart metering, public transit, zero-waste and urban greening practices outlined by Commissioner Shri Banchhanidhi Pani above, Surat is committed to implementing climate-resilient development in its coastal zones, with support from UrbanShift. These projects include upgrading the Dumas Seafront recreational areas through low-emission mobility strategies and nature-based solutions. For more information about UrbanShift’s local interventions in India, visit the India Project page.

By connecting cities with nature, we can address the triple planetary crises of climate change, nature and biodiversity loss, and pollution. Here are five municipalities embracing ecosystem-based approaches, including UrbanShift city Surat. 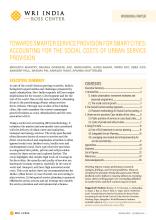 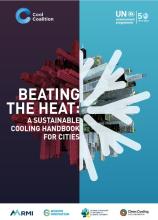 This handbook was launched at COP26 and provides case studies from cities around the world that demonstrate how to sustainably tackle the urban heat island effect.