Among the high-level officials who attended the opening session were the Minister of Environment of Chile, Maisa Rojas; Governor of the Metropolitan Region of Santiago, Claudio Orrego; and Mayor of the City of Peñalolén, Carolina Leitao. Representatives from global and regional financial, philanthropic, and research institutions, such as the Inter-American Development Bank (IDB), Development Bank of Latin America (CAF), GAP Fund, Banobras, Fundación Avina, UN Capital Develpopment Fund, and WRI Cities4Forests presented on how their respective organizations are supporting cities and national governments to accelerate the implementation of locally appropriate adaptation interventions.

The objectives of the academy were as follows:

The workshop also included a site visit to the Santiago Metropolitan Park, one of the largest urban parks in Latin America.

This Finance Academy was organized with the support of Santiago de Chile, UrbanShift, and C40. 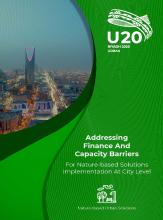 This paper advocates for cities to adopt nature-based solutions through evidence-based arguments and case studies of cities across the globe.

This Peer-to-Peer Exchange brought together 20 participants from Freetown, Lima and Medellín to discuss planning and implementing urban cable cars within an integrated transportation system.