UrbanShift's Medellín-Freetown-Lima Peer-to-Peer (P2P) Exchange took place in Medellín, Colombia from November 15-17, 2022. The P2P Exchange brought together about 20 participants from the three cities to learn about planning and implementing urban cable cars within an integrated transportation system from the City of Medellín, a world leader in cable cars.

For cities with geographical barriers, cable cars can provide a relatively low-cost transportation option and have the potential to connect previously marginalized communities to jobs and essential urban services.

This P2P exchange consisted of site visits and meetings with various city departments, including the cable car authority, to learn about Medellín's experience with rolling out the cable car project.

In the early 2000s, people living in informal hillside settlements in Medellín had limited access to public transportation, which in turn limited their access to urban services and economic opportunities. This led to the physical and social marginalization of these communities. With the goal of improving social inclusion and quality of life, especially for the residents of the informal hillside settlements, Medellín introduced its first Metrocable car in 2004. Through careful planning and implementation, the urban cable car system has now become a vital component of the city's transport modal share. For instance, Metrocable Line K serves 230,000 inhabitants and Metrocable Route J serves 315,000 inhabitants.

This P2P exchange was a collaboration between UrbanShift and the C40 Cities Finance Facility.

The design of a city defines, to a great extent, the activities that take place within it. A lack of gender expertise in urban planning can therefore lead to serious disadvantages for women, children and gender minorities. 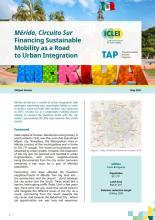 Financing Sustainable Mobility as a Road to Urban Integration

Launched in 2017, Circuito Sur is a sustainable mobility project in Mérida, Mexico that aims to connect the city's underserved southern areas with the center, representing the first step toward a model of urban regeneration, inclusion and resilience. 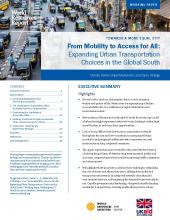 This paper highlights priority actions and enabling conditions for improved urban mobility, which can lead to enhanced social equity and environmental quality.